Some examples of recent projects…

Ealing Road in Wembley  – This site was last used as rental units for car repairs, in recent months the site had been used to fly-tip general waste.

The client required us to undertake soft strip, asbestos removal and demolition of buildings along with the removal of the the fly-tipped waste. 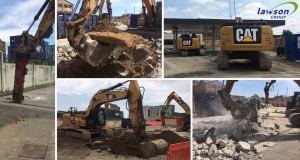 Ashley Road West, Tottenham Hale – Lawson Group removed a single storey, steel framed building that had an insulated flat roof and brick walls, it was used as the garage forecourt shop and was situated next to Ashley Road. There was a steel frame tin clad canopy that also needed be removed, this covered the forecourt area in front of the main building. As well as these structures, the Lawson Group team also completed the following: 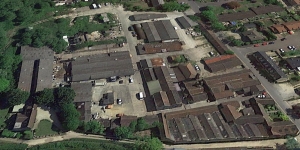 The Old Tannery in Holt Nr Trowbridge – Demolition and asbestos removal of a multiple building site, all of differing construction types – project is currently ongoing. 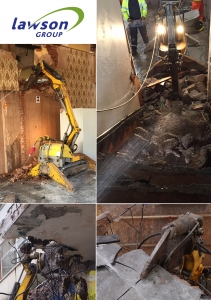 Metro Bank, Wolverhampton – This site was made up of three shops that were to be converted into one, two of the shops had a large basement underneath. The building was three storeys in height with various internal brick and block walls that divided up rooms. As part of the works, all the shop fronts were removed including the front external cladding.

Each unit had a large quantity of furnishings and shop fittings inside, these were removed during the soft strip process. The building was taken back to a bare structure – this included any internal walls, floor coverings, plasterboard and wood fixings.

On occasions, Lawson Group used a Brokk where a lot of demolition power was needed in a confined area.  All the above was carried out by Lawson Demolition, along with asbestos removal works carried out under an ASB5 which was performed by Lawson Environmental – both of which are divisions of Lawson Group.

Arborfield, Berkshire – This four year project is starting to draw to a close, with the the final structures due to be demolished soon. Check back soon for our complete set of case studies devoted to this huge project.